States with Most Sightings of Bigfoot

Since the beginning of 2022, there have been 20 states that have received reports of a Bigfoot sighting. While most U.S. sightings of this ape-like creature have occurred in the Pacific Northwest, all 50 states have received sightings – including Ohio.

So where are you most likely to claim a Bigfoot sighting? What are the odds? Although you won't ever be able to use a BetMGM Ohio bonus code for any Bigfoot-related bets, this certainly makes a great conversation starter. Our team took to hunting down the latest stats. You can be sure we'll discuss our findings with friends and fellow Ohio sportsbooks enthusiasts.

The state with the most Bigfoot sightings is Washington (with 707) – perhaps Bigfoot is a holdover from the Seattle grunge scene?

Next up is California (458), because you’re likely to see anything in San Francisco and Los Angeles. Florida comes in third (337), as Florida Man is genetically similar to Bigfoot.

Ohio? Where would one see Bigfoot in Ohio except when Michigan comes to play in Columbus? At a rest stop on I-80?

Why The Buckeye State?

Actually, according to Ohio’s Country Journal, Ohio’s Bigfoot, known as The Grassman, is most likely to be spotted in the Appalachian foothills of Eastern Ohio.

Another hot spot is the state’s north-central region. Marc DeWerth -- a noted Bigfoot researcher -- says he was followed by a Bigfoot coming out of an old Ohio strip mine. Two hikers also saw Bigfoot in Salt Fork State Park.

Think Ohio isn’t Bigfoot crazy? On August 5-6, Logan, Ohio, will host the Hocking Hills Bigfoot Festival with presentations, local cuisine and a meet & greet. Next year, you can bet on using one of the top Ohio sportsbook promos as you stroll about this popular festival that draws in over 10,000 people.

Most Likely State for a Bigfoot Sighting 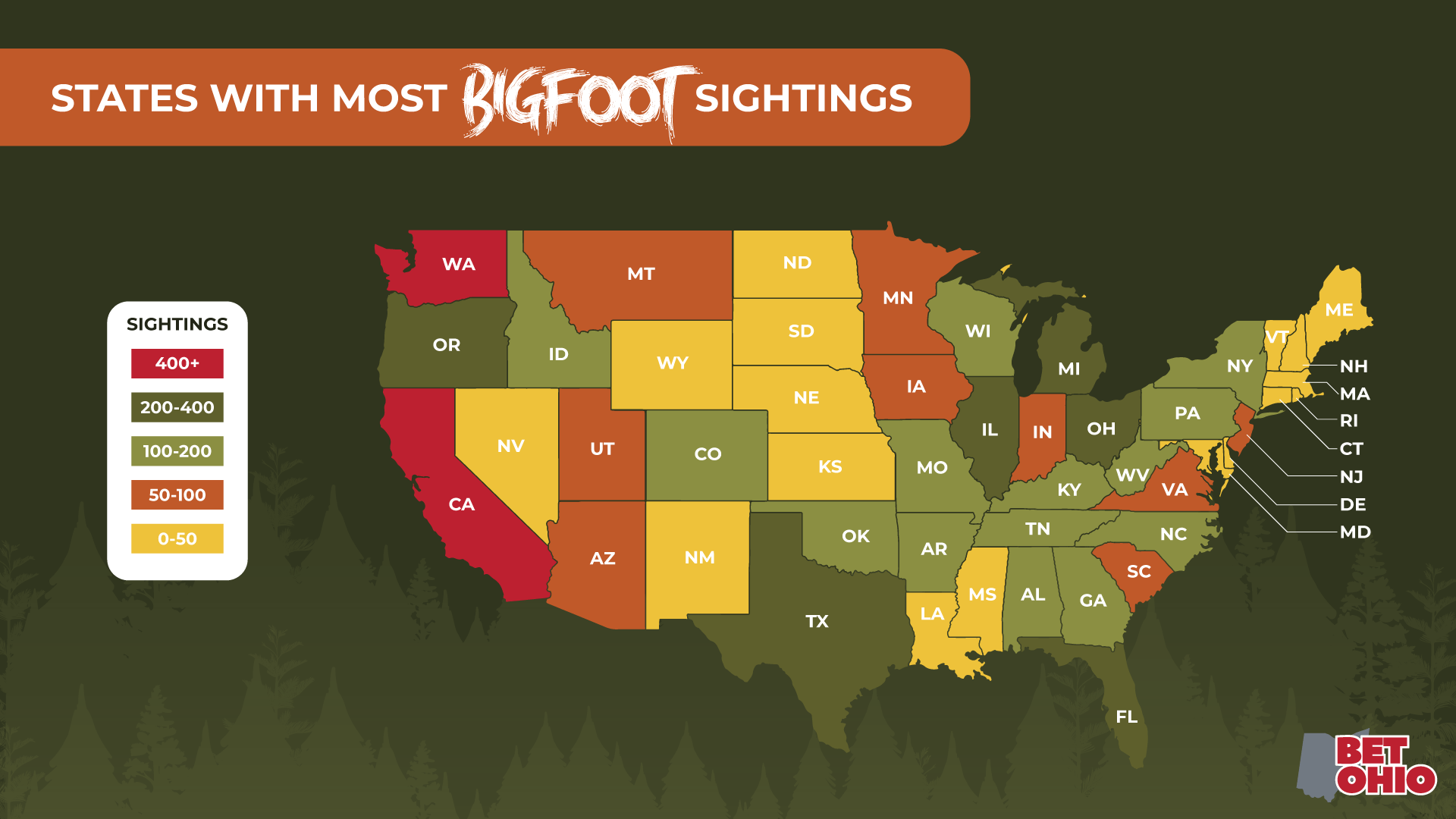 Makes sense. If you’re Bigfoot, with that shaggy coat, why hang out in the hot Las Vegas desert when you can rock out in Cleveland?

With The Buckeye State all in on the legend that is Bigfoot, maybe it will only be a matter of time until Ohio betting apps start offering odds on the next sighting.

How did we get here?

BetOhio.com utilized The Bigfoot Field Researchers Organization (bfro.net) data to compile the number of credible sightings by state that were credited and maintained by researchers, archivists, and investigators of Bigfoot.