What Are Your Chances of Being Attacked by Wildlife?

With such a diverse array of landscapes, terrains, and habitats ranging from mountains and vast plains to oceanic coasts and lake towns, it should come as no surprise to find out just how many species of wild animals call America their home – over 3,000 in fact! But in which states across the US are you most likely to come across dangerous wildlife?

While you won't come across any wildlife at Caesars Sportsbook Ohio, you might on a casual stroll through the woods. Hopefully this won't happen! But what are the odds and where are you most at risk? Let's take a look. Once you are equipped with this information, you can focus more on claiming an Ohio sports betting promo code at the best betting sites.

Analyzing data since 2000, we’ve been able to determine the states with the highest chance of animal attacks, and where you’re most likely to encounter each wild animal…

How Many Animal Attacks are There in Each State?

Comparing data from the last 20+ years, we’ve been able to determine the most and least dangerous places to live in America according to the number of animal attacks that occur there – as well as your chances of being confronted by the local wildlife. 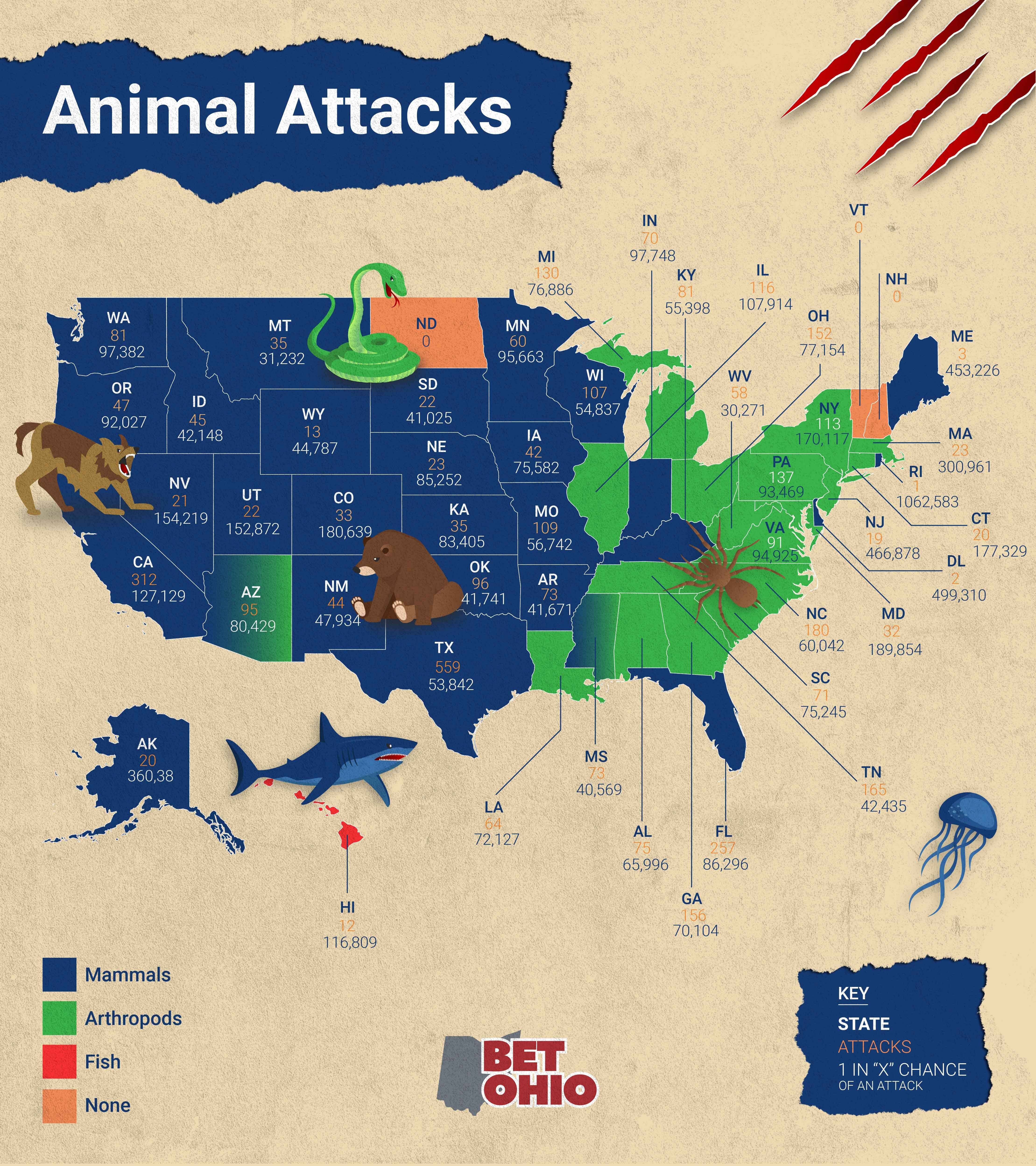 The Most Dangerous States to Live In

Looking at the total number of animal attacks across America since 2000, no state has experienced more fatalities than Texas. The southern state recorded an incredible 559 over the last two decades – mainly at the hands of dogs and other mammals.

In fact, this is almost twice the number of fatalities in the Golden State of California (312), despite having only roughly three-quarters of the population. This equates to a 1 in 53,842 chance of suffering an animal-related fatality in Texas if you lived there over a 20-year period, compared to a 1 in 127,129 chance in California.

Next up by fatalities over the last 20 years, we have Florida, famed for its free-roaming alligators and crocodiles, with 257 attacks by animals since 2000. And with a population of just over 22 million, this puts your chances of suffering a fatality at the hands of the local wildlife at 1 in 86,296.

In fourth, North Carolina has recorded 180 fatal attacks since the turn of the century, placing the state among the most dangerous for wildlife, with odds of a deadly encounter sitting at just 1 in 60,045. Meanwhile, Tennessee is close behind, rounding off the top five states by animal attacks with 165 deaths and the chance of fatality coming in at 1 in 42,435.

The Safest States to Live In

If animal attacks are a concern of yours, the safest states to live in are New Hampshire, North Dakota, and Vermont, all of which have managed to avoid any wildlife-related fatalities for over two decades.

Rhode Island’s not far behind, though, with just one animal-caused fatality since 2000, meaning the odds of being attacked over a 20-year period here is more than one in a million. Meanwhile, there have only been a few attacks by animals in Delaware (2) and Maine (3) since the turn of the century, placing them among the safest states to live in with odds of suffering a fatality just less than 1 in 500,000.

Next up, we have the archipelago state of Hawaii, that’s seen just 12 fatalities since the turn of the millennium. Perhaps unsurprisingly, considering its marine location, most deaths came from encounters with ocean animals (7), with the remaining registered as dog attacks (5). However, intriguingly,

Hawaii’s humble population means the odds of a fatal animal attack here (1 in 116,809) are actually higher than in California.
Meanwhile, rounding out the regions with the lowest recorded animal attacks over the last 20 years, Wyoming has only seen 13 fatalities. However, the odds of suffering a wildlife-related fatality here (1 in 44,787) means Wyoming is officially more dangerous than Texas, California, and Florida!

What Type of Animal Attacks are Most Common in Each State?

Comparing the likeliest states to suffer a fatality by different animals, Texas and California take first and second across most categories. But where else across America are different types of wildlife attacks most common?

Comparing animal attacks across America, it’s interesting to see where most of the country’s fatalities are concentrated, and which states are seemingly the safest. While the chances of being attacked by wildlife in some states might appear high, if you take the recommended precautions for your area, you’ll more than likely keep away from harm! And, for even more interesting odds, check out the latest in the world of sports betting in Ohio.

To discover America’s most dangerous states for animal attacks, we analyzed recorded fatalities on humans by wildlife since 2000 using data from Wonder and Wikipedia. This data also highlights the most dangerous animals in each state.

Fair Use: When using this data and research, please attribute by linking to this study and citing BetOhio.com.