How Well-Regarded Are the Bengals and Browns as NFL Away Game Destinations?

The NFL truly is a goliath on the U.S. sports landscape, as evidenced by millions of fans willing to travel across the country to see their favorite team.

Handles from Caesars Sportsbook Ohio, and other operators, is another indicator.

But, when you consider fans from NFL teams willing to travel, where do the two NFL teams in Ohio rank among destination cities?

Comparing an array of factors - including the distance between each stadium and the nearest airport, the number of bars and hotels, and the cost of visiting each location – BetOhio.com has been able to assign each NFL team an overall index score and rank the Cincinnati Bengals and Cleveland Browns.

And remember: Ohio sports betting apps are just weeks away, as the state opens mobile wagering on Jan. 1.

With an overall index score of 60 out of 100, the Cincinnati Bengals offer the best NFL away fan experience in Ohio, and rank second overall when all teams are considered – behind only the New Orleans Saints (73.4).

This is contributed to by the Bengals having a significant number of bars (82) and hotels (77) within a mile of Paycor Stadium, as well as being situated just six miles from the nearest airport. In addition, with the family gameday essentials costing just $437.30, the Bengals are the most affordable NFL team to visit.

Of course, it doesn’t hurt that the Bengals, with quarterback Joe Burrow, are an exciting team to watch, and will make for plenty of NFL betting action, especially when using an Ohio betting promo code. 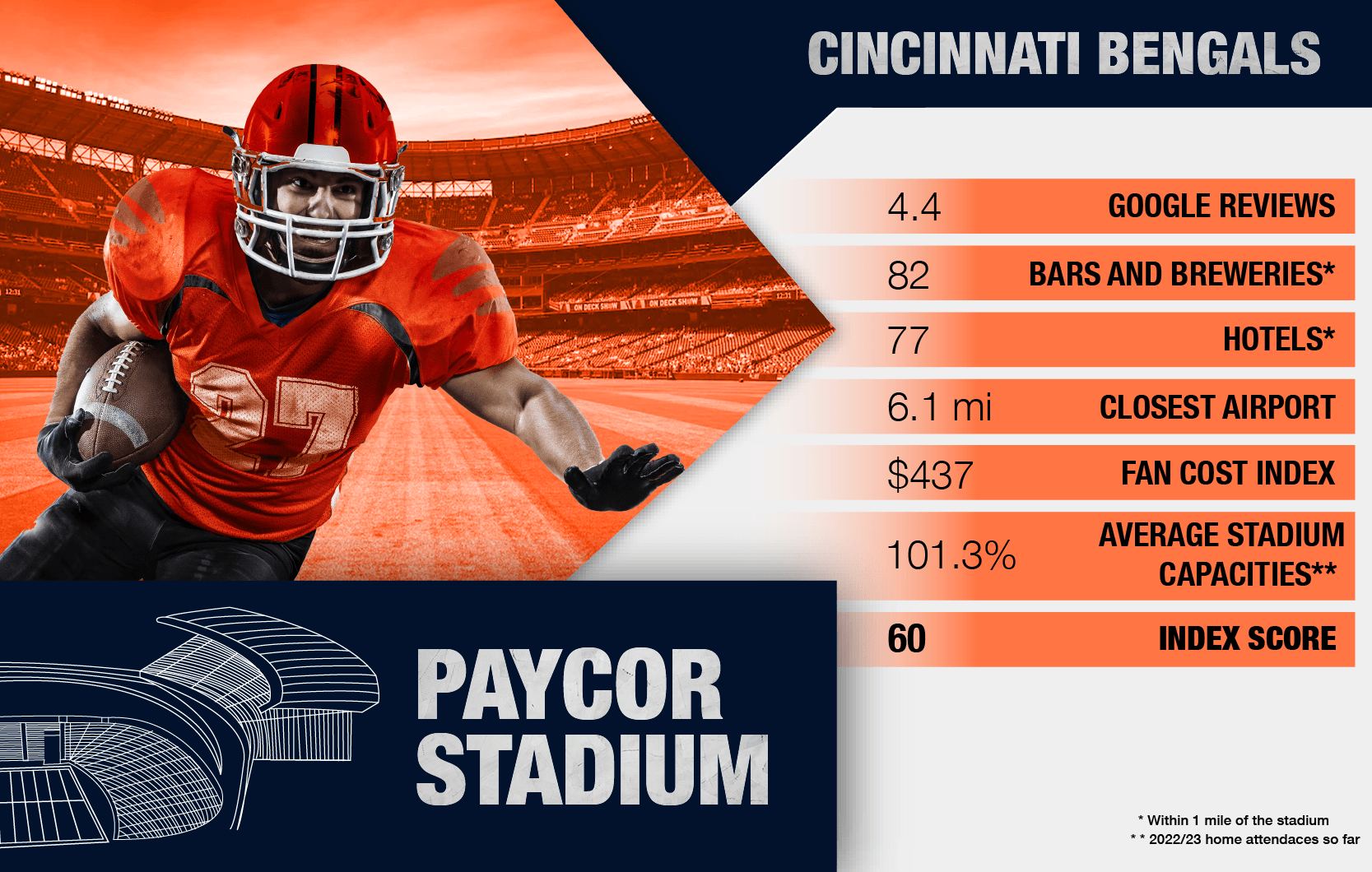 Despite ranking as the second-best NFL team to visit in Ohio, the Cleveland Browns (54.8) actually perform relatively well when all teams are considered, placing eighth, just behind the Kansas City Chiefs and Minnesota Vikings (both 55.4).

Just like the Bengals, the Browns have among the highest number of bars within a mile of their home stadium (60), as well as a healthy range of hotels (30). However, a sticking point for away fans is the inconvenient 14 miles between the nearest airport and FirstEnergy Stadium, over twice the extra travel distance the Bengals (6.1 miles) ask of arriving supporters.

Where Are the Best and Worst NFL Destinations?

Bet Ohio.com analyzed where the Bengals and Browns rank among the best and worst away games for visiting supporters, but which other teams sit at either end of the table?

The Best Away Games for Visiting NFL Fans

The Worst Away Games for Visiting NFL Fans

With the complete index in hand, hopefully you’re now better prepared for away games for your favorite team. For even more expert insight like this, as well as Ohio sportsbook promotions, head on over to BetOhio.com.

To determine where Ohio’s NFL teams rank when considering the best away supporter experience, we considered six different factors:

Each team was ranked for each factor and assigned a weighted index score. Index scores were then combined to give a total out of 100 and teams were ranked.

When using this data and research, please attribute by linking to this study and citing https://www.betohio.com/.