Fresh off a Rose Bowl performance for the ages, Smith-Njigba is tied for the sixth-best odds to win the Heisman in 2022. Among players with the 20 best odds, Smith-Njigba is the only wide receiver. Bettors looking to wager on his odds should consider using a Tipico Ohio promo code to maximize their value.

Smith-Njigba’s season ended with a bang. In a 48-45 win over Utah, Smith-Njigba set Rose Bowl record with 15 catches for 347 yards – good for fifth-most all-time. He added three touchdowns in the win in being named the game’s MVP.

Last season, Smith-Njigba had one of the best campaigns ever for a Big Ten receiver, breaking Lee Evans’ conference record with 1,606 yards receiving – tops among all Power 5 receivers. His 95 catches ranked in the top five all-time among Big Ten players. Smith-Njigba ranked in the top 10 nationally in both categories.

At 6-foot-0 and less than 200 pounds, Smith-Njigba is not overly big for his position but has enough bulk to be a complete receiver. In addition to the receptions and yards, Smith-Njigba finished with nine touchdowns and averaged nearly 17 yards per catch. Smith-Njigba eclipsed the 100-yard receiving mark seven times last season, including in each of the Buckeyes’ final five games.

Jaxon Smith-Njigba currently holds +1500 odds to be selected first overall in the 2023 NFL Draft, according to DraftKings Sportsbook. That’s tied for the fifth-best odds. No wide receiver has been selected No. 1 overall since Keyshawn Johnson in 1996. Barring major regression in 2022, Smith-Njigba is sure to be one of the top receiving prospects in 2023. You can guarantee he will be on bettors minds when Ohio sportsbooks go live on January 1, 2023.

Things to Know About Jaxon Smith-Njigba 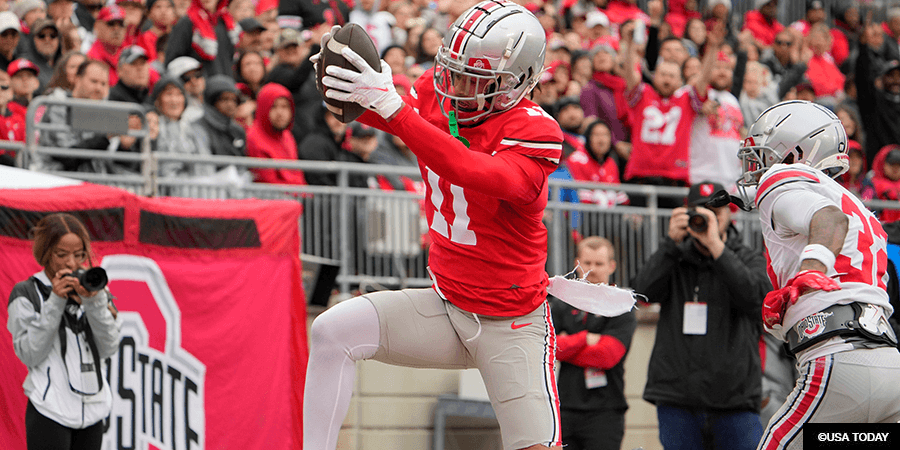 Who Are Jaxon Smith-Njigba’s Parents?

Where Did Jaxon Smith-Njigba’s Go to High School?

Jaxon Smith-Njigba attended Rockwall High School in Rockwall, Texas. A member of the 2020 recruiting class, Smith-Njigba was a five-star prospect, according to the 247Sports Composite rankings and the 6A Player of the Year in Texas. Smith-Njigba ranked as the No. 29 overall prospect and the fifth-best wide receiver.

According to DraftKings Sportsbook, Smith-Njigba holds +2500 odds to win the 2022 Heisman Trophy.

DraftKings Sportsbook is among a number of U.S. sportsbooks where bettors can wager on the 2022 Heisman Trophy winner.

Jaxon Smith-Njigba currently holds +1500 odds to be selected first overall in the 2023 NFL Draft, according to DraftKings Sportsbook.