Ohio State quarterback C.J. Stroud currently holds the best odds to win the Heisman Trophy, but he’s not the only member of the Buckeyes to watch. TreVeyon Henderson currently holds +4000 odds, according to DraftKings Sportsbook Ohio.

Ohio bettors are surely following this race closely, as sports betting in Ohio is set to launch in the coming months.

Perhaps lost in the shadow of his own quarterback and other Big Ten studs like Hassan Haskins and Kenneth Walker, TreVeyon Henderson quietly put together a season to remember in 2021. At 5-foot-10 and 210 pounds, Henderson has a durable frame, has big-play ability, and is a complete back.

Once sports betting launches in the state, it's worth checking the top Ohio betting apps to see how these odds differ from book to book.

Henderson eclipsed the 100-yard rushing mark three times last season, including a 270-yard effort in a win over Tulsa. With more touches, Henderson may have had an even bigger year in 2021, but taking the ball out of C.J. Stroud’s hands is rarely a good idea. The fact that Stroud is so good could be the biggest obstacle to Henderson winning the Heisman.

Although he received 20 carries in just three games last season, Henderson managed to average better than 6.8 yards per tote. That ranked second in the Big Ten and 13th in the country.

With names including Howard “Hopalong” Cassady, Bob Ferguson, Archie Griffin, Eddie George, Maurice Clarett, and Ezekiel Elliott, Ohio State has a rich history in the running back position. Ohio State is tied for the most Heisman Trophies with seven. Six were won by running backs.

George was the last Ohio State running back to win the Heisman when he did so in 1995. Griffin, the 1974 and 1975 winner, remains the only two-time Heisman recipient.

When everything goes live in the Buckeye State, be sure to check back with BetOhio to get all the latest Ohio sportsbook promos.

During his first season in Columbus, Henderson finished with 1,248 yards rushing and 15 touchdowns while adding 27 catches for 312 yards and four touchdowns. Henderson ranked in the top 15 nationally last season in yards per carry average. He finished second in the Big Ten with 19 total touchdowns and third in yards from scrimmage with 1,560 yards. 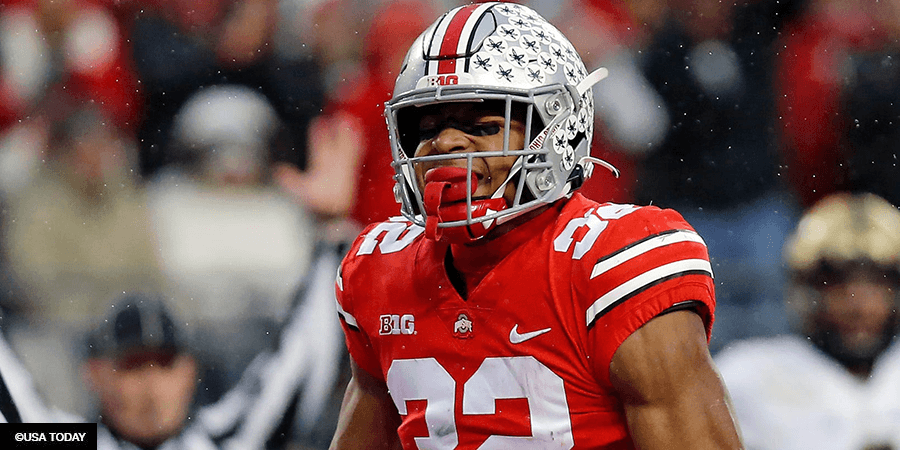 Things to Know About TreVeyon Henderson

TreVeyon Henderson finished as a second-team All-Big Ten selection and a Freshman All-American in 2021. His 19 total touchdowns in 2021 set a new Ohio State freshman record.

Where Did TreVeyon Henderson Go to High School?

TreVeyon Henderson attended Hopewell High School in Hopewell, Va. As a five-star recruit, Henderson was ranked as the nation’s No. 1 running back and No. 23 overall prospect for the 2021 recruiting cycle, according to the 247Sports Composite rankings. In 2019, Henderson was named Gatorade Player of the Year in Virginia.

Who Are TreVeyon Henderson’s Parents?

TreVeyon Henderson’s parents are Lakeesha Hayes and Trenton Henderson. Henderson’s older brother, Ronnie Walker Jr., is currently a running back at Virginia. His younger brother Kesean Henderson is a 2024 prospect with scholarship offers from Maryland, Pittsburgh, Virginia, Virginia Tech and West Virginia among others.

TreVeyon Henderson runs a 4.48-second 40-yard dash. At 5-10 and 210 pounds, that is a solid time and speaks to Henderson’s big-play ability.

TreVeyon Henderson is from Hopewell, Virginia.

DraftKings Sportsbook is among several U.S. sportsbooks where bettors can wager on the 2022 Heisman Trophy winner.

Just two years out of high school, TreVeyon Henderson is not eligible to enter the NFL Draft until 2024.

TreVeyon Henderson attended Hopewell High School in Hopewell, Virginia where he was a five-star prospect and the top running back in the country for the 2021 class.