Where Do Cleveland Cavaliers Fans Rank in terms of Most Rewarded NBA Fans?

A ranking system of the 30 NBA teams was developed by BetOhio.com to find out which fanbase has been rewarded the most over the last 11 seasons.

The first category, “Minutes Spent Per Win” was determined by taking the amount of regular-season games played by each team since the start of the 2011-12 season until the end of last season, multiplied by the average length of a televised NBA game (two hours, 13 minutes).

Once that number was calculated, we divided it over the amount of victories during that same span (2011-12 to 2021-22 season) to arrive at the final amount, which represents the amount of minutes watched by fans per regular-season win.

The second category, “Points Deducted for Playoff Success” was utilized to decipher the value of seeing playoff success during those 10 seasons gathered in the first category.

The point values were: 1 point per playoff berth, 3 points per playoff series win, 3 points per NBA Finals appearance and 15 additional points for an NBA Championship win. After adding all of the points together for every postseason from the 2011-12 season to 2021-22 season, the points were deducted from the first category to arrive on the final points and rankings.

Cavaliers Fans Come In At Middle Of The Pack

Fans of the Cleveland Cavaliers rank as the 15th most-rewarded fan base of the last 11 seasons.

Cavs fans have spent 310 minutes per win, which is the eighth-most in the league, but Cleveland has been boom-or-bust across Ohio betting apps, with 67 points deducted for playoff success, which ranks the third-most in the league behind the Golden State Warriors and Miami Heat.

In that time span, Cleveland returned to relevancy with the return of LeBron James in the summer of 2014. In four years with James, the Cavaliers went 13-3 in postseason series and reached the NBA Finals in all four seasons, winning the franchise’s first NBA Championship in 2016.

In the three years before James returned and the four seasons since he left for the Los Angeles Lakers, the Cavaliers have not made the playoffs and have had just one winning season (44-38 in 2021-22). 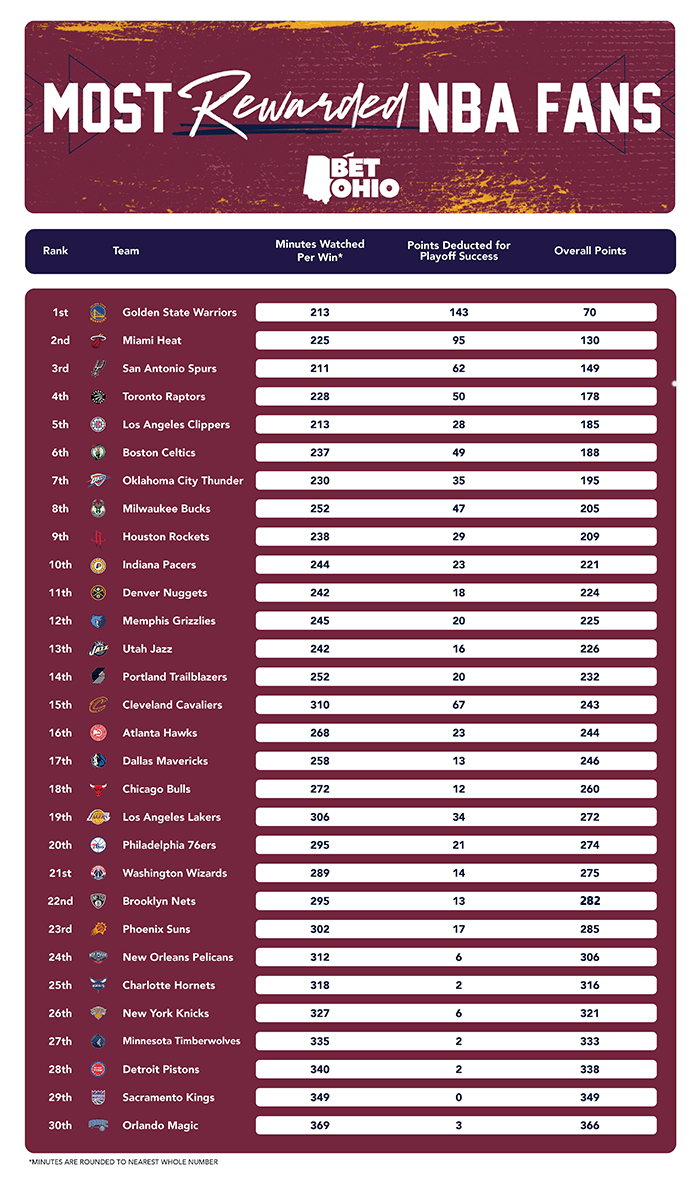 Register Early For $200 in Free Bets + $100K Free Bet Sweepstakes
Activate Code
Terms apply for all bonuses. Must be 21+ to participate.

Sports betting is coming to Ohio on Jan. 1 with one of the biggest rollouts in the nation. Here are the odds for the Cavaliers for the 2022-2023 season.

According to DraftKings Ohio, the Cavaliers are just outside the Top 10 in odds to win the NBA Championship (+3000) and the sixth-favorite to win the Eastern Conference at +1300.

Cleveland is a moderate underdog to win the Central Division at +240 behind the favorite Milwaukee Bucks (-240).

However, Cleveland is a heavy favorite to reach the playoffs for the first time with James not on the roster since 1998. Currently, the Cavaliers are -400 to reach the postseason and +300 to miss the playoffs.

Stay close to BetOhio for the best Ohio sportsbook promo codes ahead of Jan. 1.

Shelby Dermer is a reporter for BetOhio.com. Shelby has been a sports reporter for the Cincinnati Enquirer for the last five years and now lends his expertise to the Ohio sports betting market. He grew up in Waynesville, Ohio, and graduated from Ohio University.