Who Were Ohio’s Most Popular Athletes of 2022?

With 2023 right around the corner, it has been a rollercoaster 12 months for Ohio sports fans and Ohio sports betting promo codes.

For NFL fans in Cincinnati, the year started with heartbreak, as the Bengals narrowly missed out on Super Bowl glory, eventually losing the big game to the Rams, while NBA fans in Cleveland saw the Cavaliers just miss out on a playoff spot.

However, it has been a strong year for individual performances, with many Ohio-born stars across each major league continuing to make a name for themselves. So, we wanted to compare the popularity of each to reveal the most hyped athletes from the Buckeye State.

By collecting online and social media performance data for each NFL, NBA, NHL, and MLB star (who was actively playing at some point during 2022), we’re able to reveal the most popular players from Ohio over the last 12 months.

To do this, we created an index that considered five key factors with individual weightings adding up to 100. These were: Average monthly Google searches, Wikipedia page views, social media growth, social media mentions, and the percentage of online comments deemed positive. All of which were recorded over the last 12 months

So, without further ado, read on to find out who makes the top five and where your favorites rank. Also, keep tabs on BetOhio for the best Ohio betting apps in 2023. 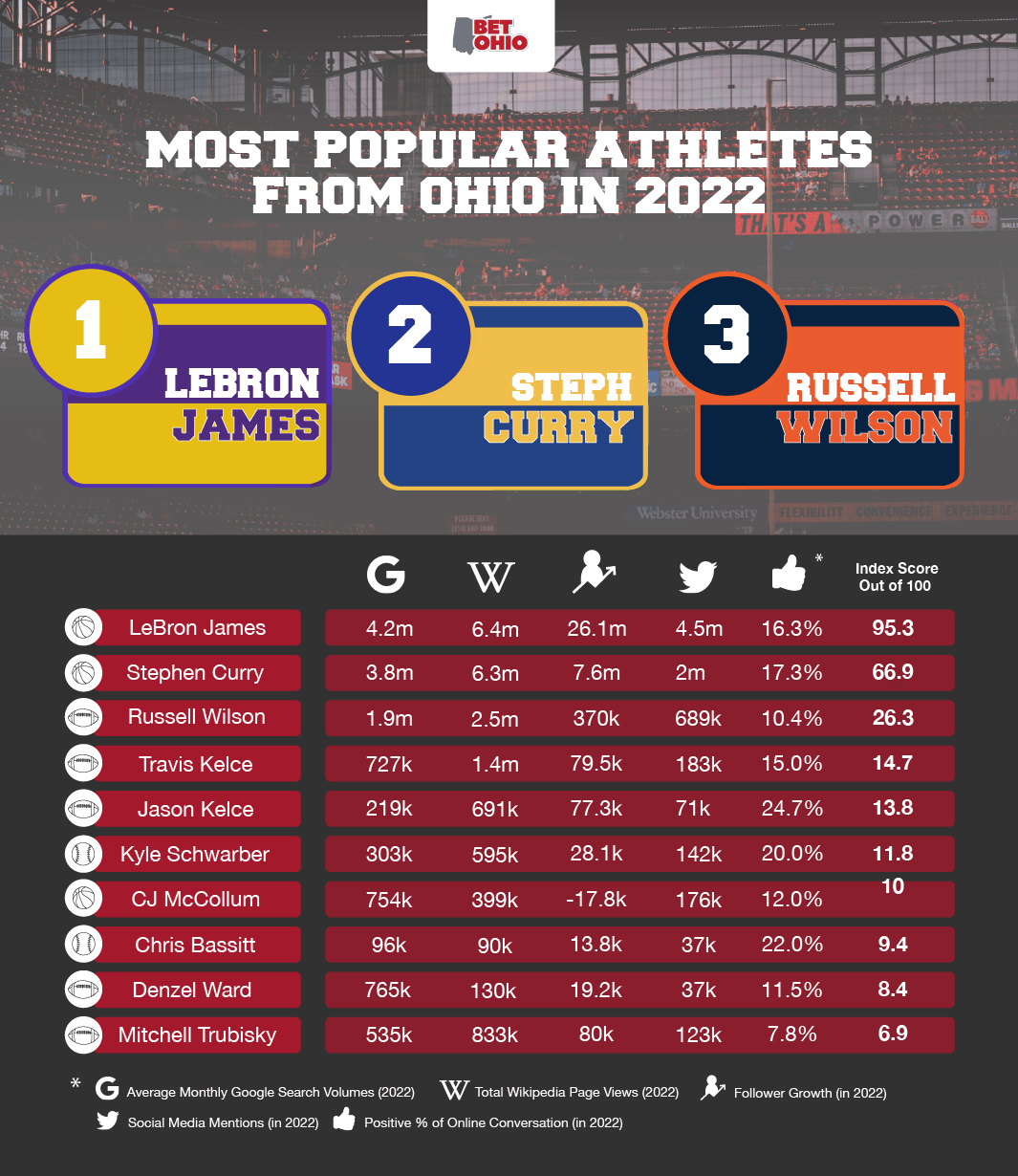 NBA icon LeBron James puts Ohio on the map for sports stardom. In his 20th year playing in the NBA, the legend has been the subject of numerous social media posts and campaigns, marking his extraordinary career and the impact he has had on the basketball world. And with a total index score of 95.3, he’s well ahead of the chasing pack.

Born in Akron, the Lakers forward recently collaborated with Nike on Air Max 1, which is a homage to the English soccer team, Liverpool FC (he’s a minority shareholder), which could have played a part in the astonishing 4.5 million social media mentions he’s received this year.

With LeBron’s follower growth totting up to 26.1 million in 2022, it’s only to be expected that he’s the (leading) star of the show in Ohio for sports-related fame.

And we know Cavaliers fans want him to finish his record-setting career in Cleveland when the time comes, but that ceremonial season may be a ways off. James at BetMGM Ohio is +15000 to win NBA MVP, good for the 15th best odds across the league.

Next up is NBA player Steph Curry, with an index score of 66.9. His position as a key player for the Golden State Warriors has seen his fame grow and grow, proven by the sheer volume of Wikipedia page views Curry has recorded in 2022 (6.4m) – just a million less than the number 1 Ohio star, LeBron James.

Gaining 2 million social media mentions this year and a massive 7.6 million growth in followers, it seems Curry, also born in Akron, is continuing to win over fans. Fans might want to consider using a Caesars Ohio promo code to place a wager on Curry to win NBA MVP, as the operator lists the two-time NBA MVP at +2500 to take home the award for a third time.

Cincinnati-born Wilson grew up in Richmond, Virginia, before his current run in the NFL saw him rise to fame. And with 698,000 social media mentions this year, it’s no wonder he ranks so highly on our index.

Unfortunately for Wilson, the positive sentiment may be lacking across social, as the Broncos were among the first NFL teams eliminated from postseason qualifying this year.

Born in West Lake, Ohio, Kansas City Chiefs tight end Travis Kelce (14.7) takes the fourth spot. We’re not shocked to see this superstar, born and raised in Ohio, in the top five. He is starting to close in on Tony Gonzalez's record for the most receiving yards by a Kansas City tight end.

Interestingly, despite Russell Wilson ranking third, it seems Travis Kelce has a higher positive sentiment rate of 15%, compared to Wilson’s 10.4%. It’s perhaps even more surprising that Kelce didn’t feature further up our list.

The older brother of Travis Kelce and center for the Philadelphia Eagles, Jason Kelce (13.8), was the fifth most popular athlete in Ohio based on our findings. He didn’t fall too far behind his sporty sibling, though, with Jason’s follower growth in 2022 (77,300) just behind Travis’ (79,500).

With plenty of Wikipedia views (691,000) and the highest rate of positive online conversations (24.7%), Jason Kelce is a star in his own right and one of the greats – and his 71,000 social media mentions prove that!

And there you have it – the greatest, most famous athletes that represent the brilliance of Ohio! After discovering all about Ohio’s top sports stars, you’ll probably want to find out what other sports knowledge we have under our belt.

So, discover further insights into your favorite sports, players and more by heading back to BetOhio.com, also home to the best Ohio Sportsbook reviews.

To determine Ohio’s most popular athletes of 2022, we created an index that considered five key factors with individual weightings adding up to 100.

To create the ranking, BetOhio.com combined the score of each factor to get a final index score out of 100. And the higher the score, the more popular the athlete!